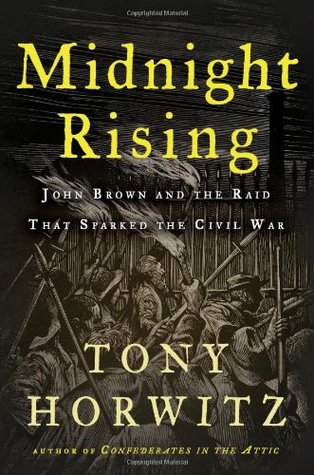 I read this book a few months ago, and just decided to write about it after finishing Team of Rivals. The book is about John Brown's raid on Harpers Ferry in 1859. In my high school American history textbook I remember there being maybe a sentence or two about John Brown, which basically said that he was an insane person who went around Kansas killing people in their sleep, before trying to start an insurrection in Virginia, for which he was executed.

The truth is far more nuanced and interesting than this. My best guess as to why I was taught such a different version in school is that high school history is meant to instill patriotism by showing the country in a positive light, and this story has far too much moral ambiguity to do that.

Far from being insane, John Brown seems to have been a very moral person, who was aware of what he was doing, and thought it was for the best, in spite of the violence he was committing. Brown was a very religious man who was very much opposed to slavery. Despite having been raised by a pacifist father, he eventually came to the conclusion that the only way to combat the violence and injustice of slavery was with violence.

The  Pottawatomie massacre was a response to the sacking of the town of Lawrence, Kansas by pro-slavery forces, where only one person was killed. Brown and his group killed five people in one night, and this sparked the "Bleeding Kansas" period of violence over the issue of slavery in the state. While killing anyone is in my opinion unjustifiable, I am not sure what the assertion that Brown was "insane" was based on.

After the massacre, Brown continued to support abolitionist causes and had support from many well known abolitionists on the East Coast. After years of planning, Brown finally attempted his raid on Harpers Ferry. He believed that if he got weapons to slaves they would rise and join him in an insurrection. Whether or not he believed his plan could succeed I do not know, but it did not succeed and Brown and most of his men were arrested and executed.

The raid was a very historically important event. The Southerners believed that it was a Northern conspiracy against them, while the Northern abolitionists made him a hero and a martyr who sacrificed his life to help others. Today some people view Brown as a visionary hero who planted the seeds for the Civil War and civil rights, while others - such as the writer of my old history textbook - view him as an insane terrorist. I had not questioned what I was taught in high school before reading this book, but it seems clear that while he may have been a terrorist (depending on how you define the word) he was definitely not insane. He refused offers to be rescued preferring to die and bring attention and support to his cause. It is possible that he never expected his raid to be successful, but no matter how it turned out he would achieve his objective of bringing attention to the abolitionist cause.

While I disagree with his methods, there is no doubt that Brown was a pivotal figure in the history leading up to the Civil War. This was a very interesting and engaging book and I recommend it.