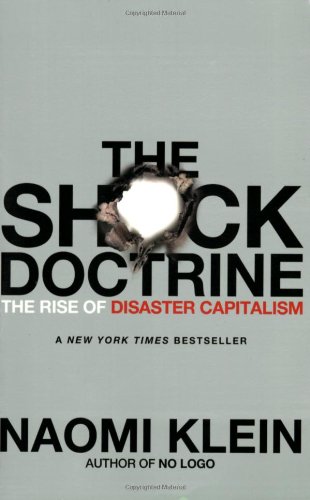 I just finished reading The Shock Doctrine by Naomi Klein. This book picked up right where Acid Dreams left off - discussing the CIA's research into brainwashing and torture. It starts off with the story of a Candian woman who went into a psychiatric hospital for depression and how her psychiatrist, who was on the CIA's payroll, proceeded to test his new theories on her about how to cure mental illness by trying to destroy her personality and then rebuild a new one. In this case his methods included medically induced comas, constant electro-shock therapy, sensory deprivation followed by sensory overload, as well as cocktails of many unknown and dangerous drugs. After he had subjected her to sufficient stress to regress her to a child-like state he then tried to rebuild her personality by playing tape loops with messages like "I am a good and caring mother." Not surprisingly, this treatment failed, and when she was discharged she was in a far worse state than she had been when she arrived.

This story is a metaphor for what the book talks about - how the United States tries to impose free-market economies on unwilling countries by using what Ms. Klein calls "The Shock Doctrine." The Shock Doctrine basically involves taking countries that are in a state of crisis and using the panic and shock felt by the populace to push through radical free-market "reforms."

During the Cold War the US made a practice of supporting ruthless dictators so long as they were against communism or socialism, and supported numerous military coups of South American countries where the democratically elected governments were leaning towards socialist policies. These countries were no where close to the type of authoritarian communism of the USSR, but maybe had slightly socialist policies like a strong social safety net or some nationalized industries. And invariably, the effect of the free-market reforms and free trade regulations were what we still see today - huge income inequality, social stratification and the rise of powerful multinational corporations. In other words in these countries the regular people were probably doing fine with jobs at state owned factories that paid enough for them to purchase the essentials, which may have been price controlled. Then the US comes in and privatizes industry and eliminates tariffs and opens up free trade, which results in the cost of living going up, many jobs being eliminated, and the resources of the country being sold off to foreign corporations. The new governments in many cases had to give themselves dictatorial powers in order to push through these unpopular economic programs, and the end result was that the multinational corporations and the wealthy got more wealthy and the rest of the people were driven into poverty.

We see this in Russia after the collapse of the Soviet Union, when Yeltstin dismantled the parliament and gave himself complete control over the country so he could push through his economic "reforms." The Western press mostly reported that he had to do this to prevent the government from being taken back by hard-line communists, so I don't know what the truth of the situation was, but when viewed through the history of economic "reforms" forced by the IMF and the US, this interpretation certainly seems more plausible. While Yeltsin had dictatorial powers, he pushed through the economic policies which resulted in the rise of the Russian oligarchs, and led to the state of the country now - where you have a small number of incredibly wealthy billionaires and the majority of the population is close to or in poverty.

These radical free-market policies were largely conceived of and popularized by Milton Friedman and the Chicago School of economics, who believe that completely free markets are completely efficient, and the less government interference in the markets, the more efficient they are and the better off everyone will be. This philosophy states that the role of the government should essentially be limited to having a police force and a military to ensure law and order and protect the country, and everything else should be done by private enterprise. I learned about this theory in Business school, and at the time it made perfect sense. It took me a good few years of gathering evidence from the real world and thinking on my own to come to the conclusion that in reality this theory doesn't work. In reality this leads to exactly what we are seeing in the US, and the rest of the world, today: the rich get richer and the poor get poorer. I have some thoughts as to the flaws in the theory, but those are for another day.

The book describes numerous occassions where the Shock Doctrine has been put into place - starting with South American military coups, going through the collapse of the Soviet Union, the fall of apartheid in South Africa, the response to the 90's Asian economic crisis, the response to the tsunami in Asia, 9/11, and leading through into Iraq and even the response to Hurricane Katrina. The pattern is always the same - a crisis puts the people into a state of shock, the US government, along with the IMF and the World Bank, takes advantage of the crisis to push through deeply unpopular economic policies. By the time the people regain their senses it is too late to do anything about the new economic policies. And the end result is that the general population ends up doing significantly worse while a small number of new billionaires are made and billions flow out of the country into the pockets of the multinationals.

Unfortunately, now that the threat of communism is long gone, it seems that neo-liberal free-market capitalism is the only game in town and I suspect that things will get much worse before they get better. I think it is going to be very difficult to try to make any significant changes when any such changes will be opposed by the people who profit from the current system and thus have all the money and power. If nothing else, this book was a wake-up call.